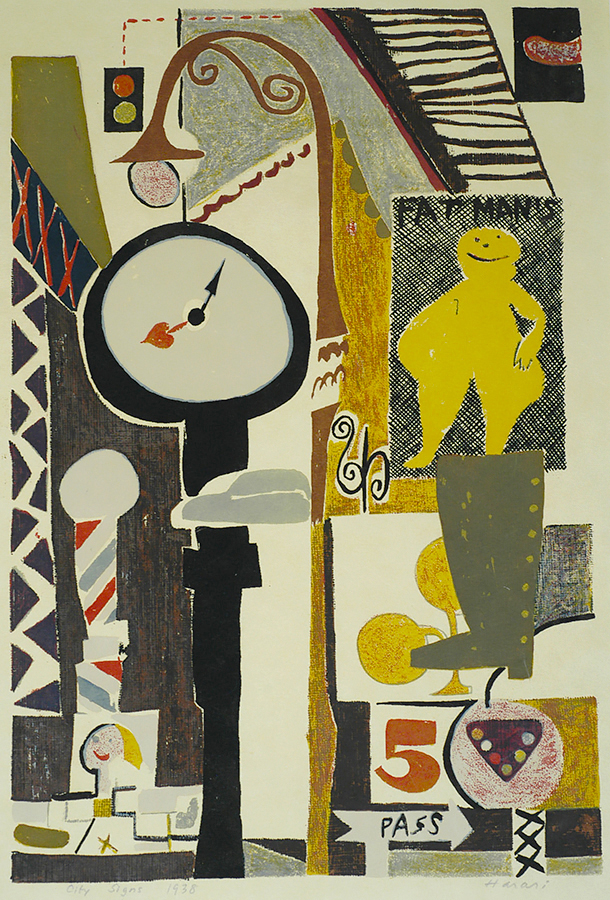 Screenprint, 1938, from a small edition printed in 1938. 18 1/8 x 11 7/8 in. Signed, titled and dated in pencil. This is a fine impression printed on cream colored paper with full margins. The condition is excellent. (There's a small repaired tear in the top margin, well away from the image.) Harari was employed by the mural project of the New York City WPA. He was a founding member of the American Abstract Artists Group and studied the screenprint medium with Anthony Velonis. As for City Signs, "Harari exploited the screenprint's suitability for achieving flat planes of colour. He allowed the non-printed areas of the paper support to form an integral part of the composition." (see page 171 of The American Scene; Prints from Hopper to Pollock by Stephen Coppel (2008). City Signs is illustrated and further discussed in this British Museum catalogue. This memorable work is also illustrated in American Screenprints by Reba and Dave Williams, Pg. 35 (1987). This work was included in the seminal exhibition, Artists for Victory, held at the Metropolitan Museum of Art in 1942. There was a second edition of 30 printed in 1990. (This was the year the artist died.) These late impressions are somewhat garish and not as desirable as the rare, early ones. Other early impressions are in the Smithsonian American Art Museum and the National Gallery of Art. Our impression is a slight color variant and according to Susan Teller, who worked with the estate, the artist was known to be an experimenter.       SOLD