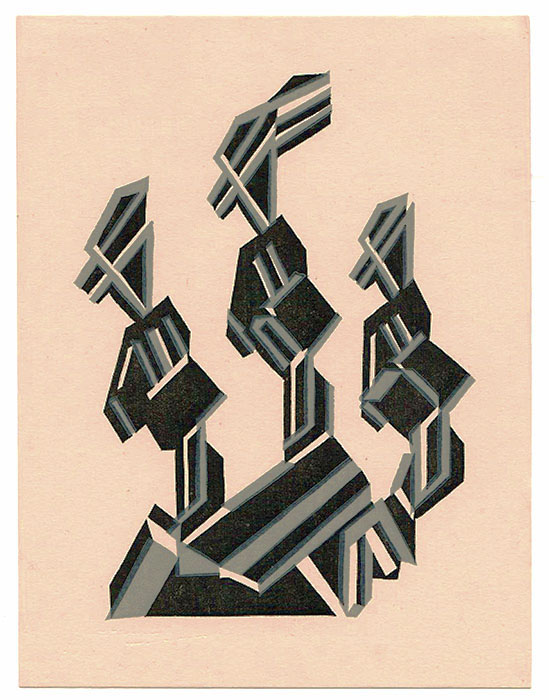 Woodcut printed in colors, 1914, Colnaghi 107, Greenwood W/D 10; from a very small edition. 5 5/8 x 4 1/2 in. Unsigned as usual. This is a superb impression of this extremely rare print. The margins are most likely full with the sheet measuring 7 x 5 3/8 in. The condition is fine other than for subtle pressure marks below the image which we've seen in another impression. This is the quintessential British Vorticist image and in the words of Cliff Ackley, "Brief as it was, Vorticism was the first radically modern, inherently abstract British art movement. Not until the 1930s, with the work of artists suck as Ben Nicholson and Henry Moore, would pure abstraction again take the lead." (See page 20 of Rhythms of Modern Life, British Prints 1914-1939 (2008). Wadsworth went to Munich in 1906 to study engineering and there he attended the Knirr School of Art and learned how to make woodcuts. When he returned to England he studied at the Slade School and Bradford School of Art and became friends with Roger Fry and Percy Wyndham Lewis. He contributed to the Vorticist manifesto "Blast" and exhibited in the 1915 Vorticist Group exhibition. This iconic work appears in several books on the subject of modern British printmaking. Provenance: Scolar Fine Art, London.      SOLD