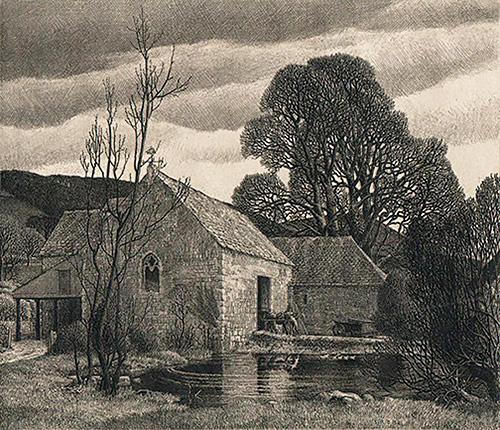 Etching, 1932, Beetles 32, edition 30. 5 1/4 x 6 1/16 in. Signed and titled in pencil. Inscribed, "1 tri"(al), "2nd St"(ate). This is a superb, early impression printed on medium weight wove paper. The margins are full and the condition is fine. According to the catalogue, "the 1st edition and records were lost in the war but the plate survived." A second edition of 25 impressions was published in 1981 by Merryhill Press, Dyfed. Badmin studied with Malcolm Osborne and Robert Austin at the Royal College of Art. He exhibited with the Twenty One Gallery, London, which published most of his forty prints. An impression from the early edition is located at the Yale Center for British Art.      SOLD