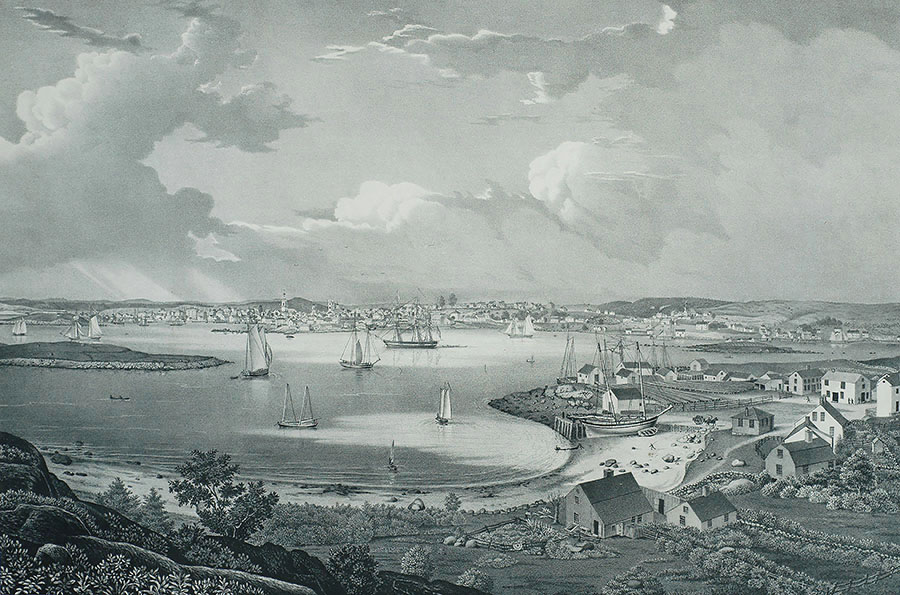 Lithograph, 1835-36, edition unknown. 19 5/8 x 13 1/16 in. Signed with the printed signature line lower left, "Drawn from Nature and on stone by F.H. Lane." This is a fine impression of this exceedingly rare print. The margins are wide and the condition is very good. (There's slight light toning within a previous mat opening and the sheet has been professionally backed with thin Japanese paper.) Printed and published by Pendleton's lithography, Boston, this exquisite view is a landmark work in the development of fine art lithography in America and the first formal cityscape by Lane done in this medium. As discussed by Catharina Slautterback in "Acquired Tastes: 200 Years of Collecting for the Boston Athenaeum," (2006), pages 301-302, "By 1835 Lane had already served three years of his Pendleton apprenticeship and, perhaps tiring of the uninspiring commercial fare of music sheet covers and advertisements, decided to tackle an ambitious city view, choosing as his subject the harbor of his hometown of Gloucester. The print was offered for sale by subscription, and its progress was duly recorded by the local newspaper, the Gloucester Telegraph. Lane’s original drawing for the lithograph received considerable praise in the Telegraph.... The lithograph took nearly seven months to complete, indicating that Lane took considerable time and trouble with his first formal cityscape, using the medium to excellent effect to create rich tonal qualities." The print is amazingly detailed and yet the overall effect is one of serenity and light. This print certainly foreshadows Lane's rise as a luminist painter extraordinare and his skills as a draftsman cannot be understated.       SOLD